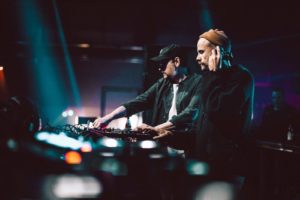 Since their first big break in 2012 the Adana Twins have established a sterling reputation, refining their sound constantly, pushing the boundaries of their musical ambition and evolving organically with the passage of time. Driven by a deep-seated desire to transmit emotion through electronic music, the German duo have been working together since 2006, merging Benjamin’s love of hip-hop and Friso’s passion for club music to produce a series of highly-regarded releases that form the foundation of their global success. Their early triumphs led to bookings all over the world, delivering their unique musical vision to dance floors on every continent, with support from a wide range of dance music luminaries including Radio 1 legend Pete Tong, Solomun, Tale Of Us and many more. Now firmly established within the underground electronic music scene, the Adana Twins are universally respected as label owners, A&Rs, producers, and inspiring DJs who love to play long marathon-sets.

The Adana Twins have a penchant for deep, dark, emotionally-charged music, which has fueled the evolution of their sound, from the house-inspired productions that thrust them into the limelight, into a more nuanced, techno-influenced vibe. Both men grew up surrounded by electronic music in their hometown Hamburg, where the sound was so prevalent, it is part of their musical DNA and, as they have matured as artists, so too has their sound.
As they’ve grown in stature and influence the Adana Twins have channelled their love for electronic music into their own platform, TAU. The label was launched in 2018 with the aim of giving them the creative space to expand their sound while also discovering and nurturing new artists. Across the first few releases the duo have signed and released music from a variety of lesser-known talents, establishing a strong identity from the very beginning. Artists like Innellea, Human Machine, Mathias Schober, BOg, Santiago Garcia, Daniel Bortz, Luis Junior, Isolée, Amberoom, and Ede have appeared on the label, which has had a phenomenal response from fans and DJs alike. It’s a project that has filled both men with inspiration and a renewed hunger for music in all its aspects; digging, discovering, producing and playing.

Their own debut on the label came with TAU003. Entitled ‘Risen’, the EP reflects the duo’s innate ability to create haunting melodies and goosebump-inducing moments of sheer exhilaration. Blending mysterious atmospherics, heartrending melancholy and contagious rhythms, the release cemented the Adana Twins reputation as purveyors of quality melodic techno of the highest order. After ‘Risen’ they followed up with another killer cut on TAU’s first compilation, Spektrum 1. ‘Jumanji’, a new wave-inspired production with an unforgettable melody and a highly-infectious groove, hit No.1 in Beatport’s Indie Dance chart and remains a favourite on the dancefloor months after it was released.
In recent years the guys have formed a close bond with Berlin’s iconic Watergate stable, joining the family in 2017 and utilising the new relationship to push forward with their techno-fueled ambitions. It all started with ‘Etah’ which dropped in February 2017 on the Watergate Affairs 02 compilation. Since then they have served up the Flower Of Cane EP and its follow-up Jupiter,plus ‘Zuul’ which appeared on Watergate’s epic compilation celebrating its 15-year anniversary. In late 2018 the duo were invited to host an installment of the brand’s highly-respected mix series. In typical Adana Twins style, they set out to make their mark, going above and beyond to collect material from their wide circle of talented friends to produce a first for the series – a mix comprised 100% exclusive, unreleased tracks by the likes of Acid Pauli, Musumeci, Upercent, SBTH, Daniel Bortz and many more. They also produced a monster remix of Patrice Bäumel’s 10-year-old track ‘Roar’ especially for the Watergate mix. The deadly rework shot to No.1 in the Beatport charts and has remained in the chart since November 2018. No surprise as it was roadtested by Tale Of Us and Sven Väth all over the world with an amazing reaction everywhere it was played. In late 2019, a vinyl-only release on the label will hit the shelves including two Adana Twins remixes of Josh Wink’s classic ‘Higher State Of Consciousness’.

Outside Watergate, they have also released with Solomun’s Diynamic label. Their track ‘Uncompromising’ was part of a compilation on the influential label in 2017 and it went down a storm, crushing clubs and festivals around the world. In 2019 Benjamin and Friso were invited to contribute to Diynamic’s infamous ‘Picture’ series. Artists are encouraged to showcase their output with a body of work created exclusively for the series. Somewhere between an EP and an album, the ‘Picture’ release has allowed the Adana Twins to really stretch out and demonstrate their production prowess with the lead track ‘My Computer’ (featuring vocals by Glowal) already going down an absolute storm… So much so that some DJs have even ripped the tune from a YouTube video so they could play it!

Parallel to their production and label curation endeavours, the boys have continued to traverse the globe, turning in performances on the big stage at festivals such as Fusion and Melt! in their native Germany to Loveland in Amsterdam, Beyond The Valley and Pitch Festival in Australia, together with an exhaustive list of the world’s greatest clubs including DC-10 (Ibiza), fabric (London), Robert Johnson (Frankfurt), Badaboum (Paris), Vision (Tokyo), Revolver (Melbourne), Module (Istanbul), The Block (Tel Aviv), Warung Club (Brazil), Stereo Bar (Montreal), Corsica Studios (London), Halcyon (San Francisco), Output (New York), PAL and Golden Pudel (Hamburg) and, of course, the family home Watergate in Berlin, plus many many more. They are regulars in Ibiza throughout the summer season, with gigs at Solomun’s seminal +1 party, Heart, and other clubs.

The Adana Twins continue to flourish, staying inspired and maintaining a high level of quality across their music, label and performances. They send dance floors into uproar wherever they go, transmitting pure emotion while nurturing new talent and courting the attention of the scene’s biggest DJs, clubs and festivals. It’s a dream come true for the Hamburg duo as they continue to push themselves, and their scene, forward every step of the way.