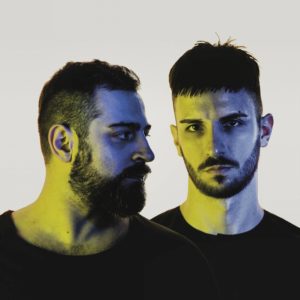 Two minds lost in music. That would be the perfect definition for Luca and Elia, better known as Undercatt. They met each other years ago, during a club night where they were both playing. Luca, the older one, immediately noticed Elia’s skills on the decks, impressive for a 17-year-old boy at that time. They felt a natural harmony right away and so it was inevitable that the two became real friends and self-proclaimed elder & younger brothers.
Their connection became stronger and stronger as time went by, although they had decided to continue producing and performing separately at first. As time passes, they also share projects in in their local area as party promoters, making their experience grow in the club scene.
2014 marked the year of maturity. The time to finally write and produce quality music together had come. Luca and Elia locked themselves in their studio with a clear picture in mind of what they wanted and needed to do. Inspired by modern Techno they started to produce atmospheric songs that were influenced by melodic and emotional elements. Undercatt was born, and it was with Diynamic.

After the first appearance on the top class hamburg based label with „Golden Area“ on the „Four To The Floor“ Various Artists series, the Big Boss Solomun and the Diynamic family decided to officially add them to their roster. 2015 marked the year of “Camargo”, becoming their most hyped track to date, which started spreading their sound worldwide. Later on, their “Sweet Disposition” remix of The Temper Trap, released on 2DIY4, and the signing of “Coral” by Sasha’s label „Last Night on Earth“, pushed them to be one of the most interesting new acts of the recent times.

In 2016, it’s time for their very first Diynamic EP, “Venus”, followed up just 4 months later by “Futura” EP. Both title tracks became quickly pushed and played by many top acts worldwide, giving the duo even more international exposure. That’s why also Pete Tong noticed them, inviting Undercatt for an exclusive After Hours Mix on BBC Radio 1, showcasing their sound. A new EP is in the making, as remixes for well known top notch labels are coming out for the summer season. The Undercatt Journey continues..