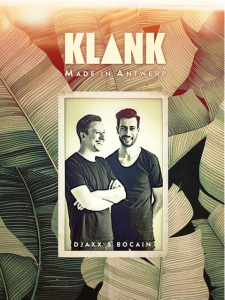 Djaxx has always been different from the other kids. At the age of 6, while everyone else was outside playing hide & seek, Djaxx was discovering music whenever he was given the chance. By the time he turned 13, while his mates were still wondering how to hide their braces when smiling, Djaxx was already walking on thin ice by trying to mix any tune with a house beat in it. It was not much later that he won his first DJ contest at age 15 and embarked on a real DJ’ing journey. This soon lead him to join forces with another all-round electronic music lover called Neurotique.
Their love for almost the entire range of eclectic music ranging from underground deep house to mainstream electro has always been one of the biggest assets of Djaxx & Neurotique. A versatility which has resulted in a track record one can be proud of; next to their residency in De Kaai, they have played 6 times in a row at Tomorrowland (including opening the mainstage in 2013) and also regularly frequent the DJ-booth of Belgium’s finest clubs such as Café d’Anvers, La Rocca and Culture Club. And did we mention Tomorrowworld in Altanta already?
Needless to say that such a DJ-career and all-round feel for ecletic music requires dedication and passion. However, Djaxx always felt an urge to elaborate on his more specific musical roots. As such, diving into deephouse on his own next to his collaboration with Neurotique enabled him to let his true colours shine through. Releasing his first track in 2014 with Deep Arena Records, Djaxx is dedicated to carry away his audience on a splendid mix of his own productions and the most hidden treasures of deephouse and UK-influenced Tech House.
Next to his own tunes, Djaxx’s quest for quality Housemusic has lead him and some likeminded friends on a true passion project to bring his Antwerp crowd the best possible Housemusic: a party concept called “High on House”. Only a year far, these parties have already become known in the Antwerp house scene for their warm atmosphere and amazing vibes, welcoming the very best of the best such as Santé, Oxia, Jacky, Truth Be Told, Ramon Tapia, Di Chiara Brothers and many more.
Wether it be through his own releases, through a heartwarming DJ-set or through the passionate DJ’s he welcomes at his parties, Djaxx should be considered a true added value for the Antwerp party scene. Definitely someone to watch out for!

Bocain loves to create hypnotising techhouse-sets. He has a unique way of building up his sets, and loves to tease the crowd with longer breaks.
Rugged basslines, steely beats, smiling faces, Bocain.