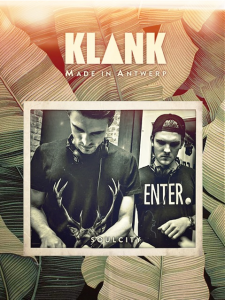 “Let’s face it nobody reads a dj bio, so in fact, all you need to know is that we really care about music and in specific house music. Whether is deep house, tech house, minimal or techno, if it has the right groove we like it. That’s why we don’t like to creatively limit ourselves by thinking in subgenres.”

Mathias & Kenneth started at a very young age experimenting with music and djying. It’s only since the beginning of 2015 that they decided to form a dj-duo, named SOULCITY.

It soon became apparent that this was a good choice because after 2 months they already won the Rupel DJ Battle and had the opportunity to play at the Dreamville stage of Tomorrowland. From then on they played some really nice gigs like High on House in Piaf and Club Baroque, Vice Festival (where they became resident) and UNDER at Magiq (Spiegeltent).

In August, one of their dreams came true by playing at the legendary Café D’Anvers as a result of winning the Free Vibes DJ Contest 2015. Besides all that they had the honour to play at some other great venues in Belgium like the Social Club in Louvain, Decadance in Ghent and La Rocca Backstage in Lier.

What makes Soulcity, is that they provide a smooth and energetic mix of quality house music. The carefully chosen ingredients of this mix are extremely infectious basslines with some jacking beats providing you that raw house sound and unique dancefloor weapons.