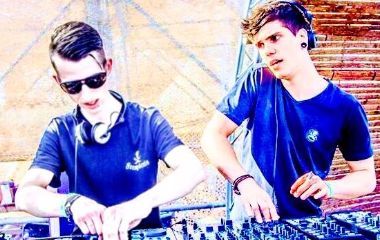 Based in Ghent (Belgium) he started exploring and digging into an unknown musical world. This was the beginning of his musical diary. First influenced by the nineties, techno & progressive, that almost crossed the borders of well known radio hits to more deeper, darker, minimalistic & psychedelic sounds.

Travelling from Belgium to Holland, Germany, Spain, Portugal and so on to keep getting inspired and amazed. As we speak he’s working on a more organic minimal techno vibe with the main purpose of sound and movement. He’ll always build up his sound with a skeleton of drums and loves to explore all the “out of this world” syntheses.

By this he also creates a sonic finesse suited in his energetic drum patterns. Allways looking for his signature sound he’s already recognized by hundred of dance floor lovers.

A constant urge to deliver the highest quality in his musical spectrum to his crowd and himself makes him a passionate young man that keeps working on his sounds and lives on a professional way for this.

“Without movement there’s no life”

Driven by his idol Richie Hawtin & inspired by him, this upcoming young talent deserves belgian underground scene.
Massaar was born in Kortrijk. He early get involved by dark minimal techno and bought his first turntables at the age of 20 in 2003.

Since 2010 he joined the feestgedruis crew who has evolved into Sweet Trade.Based in Brussels it is booking and label agency .
Massaar got scores of bookings all over in Belgium and since then you can find him regularly behind party concepts.
He played in clubs like; Fuse club , Café D’anvers , Petrol club , La Rocca , Decadance , … and also party’s like Extrema outdoor , Liberty white ,Thé Dansant , Donnerwetter and One of his dreams became reality when he had the great opportunity to play in Hamburg

Always interested by crazy noises, dark and techno beats he created and perfects his own underground style with some deep and dark rhythmic from German label. Massaar’s style can be described as strict, tight and unique.
Recently he also started experimenting with Ableton. He’s very determined to create his own sound and start producing… (to be continued).